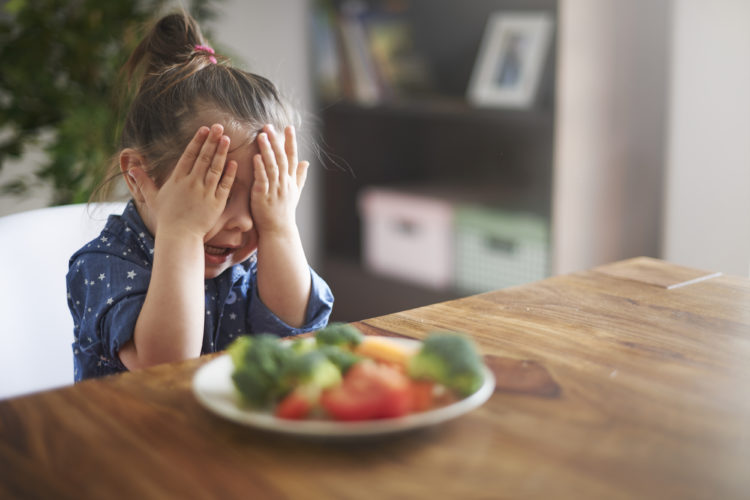 Among the thousands of things that frustrate parents most, hands down one of the most frustrating is trying to get your kids to eat.  Honestly, could there be a more futile mental wrestling match than this?  We’ve tried every line in the book and it still doesn’t work.  “People are starving in other countries.”  “You can’t have dessert until you finisher your dinner.”  You name a phrase and us parents have tried it.

A very close second to trying to get your kids to eat, is trying to get your kids to try new foods.  The reason I place this second is because in most of these scenarios if the kid eats the new food or not, it’s not entirely as important because you go in thinking they’re going to say no.   Plus it’s not as crucial as them actually eating and getting their nutrients for the day (those would be the meals you’re trying endlessly to get them to eat).  Nevertheless, we’ll always keep trying to get our kids to try new foods, among other things.

And what’s the number one line parents use when trying to convince their kids to eat?  “You won’t know until you try it.”  Does this line always work?  Definitely not.  But sometimes it does and when it does and when your kid tries that food, whether they like it or not, how victorious do you feel?

And then when the exercise is over what do you say to your child?  “I’m so proud of you for trying!”  Then your kid feels proud of themselves and the hope is that they develop a confidence to keep trying new foods.  You’ll also tell them something along the lines of “if you didn’t try this food then you’d never know if you liked it or not.”  You might also suggest, “what’s the worst than can happen?  You try it and you don’t like it.  So what?  You never eat it again.  But what if you do like it?  Well then you just might have another favorite food on your hands.”

I bring up this important life lesson because somewhere along the way, I think that we as adults need to listen to our own advice more.  Since when is it just OK for kids to keep trying new things?  At what point did we decide it wasn’t OK to try new things anymore?  Is it because of our jobs?  Is it because we’re too busy?  Did we just give up?  What’s the deal?

Once you stop it gets harder to start again

I’m not going to sit here and tell you that you need to keep trying things in your life.  That choice is yours.  But I can tell you from experience that the moment you stop trying new things, life becomes way more monotonous, and that leads to boredom, and boredom is never good.

I’m not suggesting you go out and try skydiving.  By no means should you be taking drugs just to see what they feel like, or robbing a bank to see what kind of a rush you get.  You’re an adult now and you can likely determine your tolerance for trying new things and whether or not these things could cause undue harm to yourself and others.

However, I do have to warn you.  The moment you stop trying new things, the less opportunity you’ll have.  The less of a chance you’ll have at trying new things again.  Anything done for a long enough period can become a habit.  The last habit you want is one where you are closed off from trying anything new.

You want that habit to be the opposite.  Be in the habit of trying new things.  Make it a priority.

It’s such a simple phrase but you just never know.  You don’t know what will happen if you try calling the CEO of a huge company.  Sure you might get hung up on.  Sure you might not get past the gatekeeper.  But you also just might reach that person.  You just might get that chance to pitch them your idea.

But one thing is for certain.  If you don’t make that call, none of these things happen, period.

So get out there and start taking your own advice.

You never know until you try it.