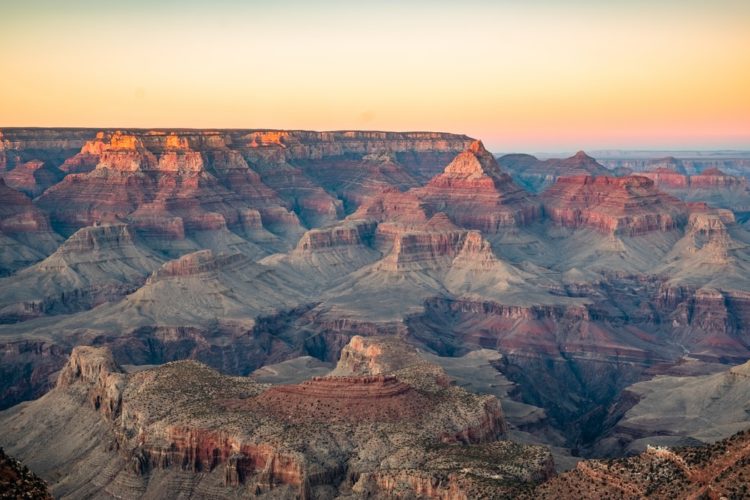 Closing in on nearly 15 years now, my then girlfriend (now wife) and I went on an amazing trip to Sedona, Arizona.  Given the trip was 7 days and Flagstaff is about two hours away from Sedona, obviously we would be visiting the Grand Canyon at least once on our trip.

So this time, when I was at the top, while I knew I wasn’t going to make the trek all the way down (it was over 6 hours on this trail), I told my wife to just let me walk for a little bit by myself and that I’d return quickly.  I couldn’t tell you the name of the trail I was on or what side of the Canyon I was on, but that’s not the point.  The point is what was next to come.

What I did know about the trail down the canyon is that it was the same one used by tour guides who took people down on Donkeys.  I also knew that a few people a year actually died falling off off these trails.   While the trails weren’t nearly as narrow as they seemed, the sheer height and looking down definitely make the hairs on the back of your neck stand up.

Still though, I trekked on and probably got down about 200-300 ft from the top when all of a sudden, out of nowhere, it started to snow.  Let me preface this by saying when we got to Flagstaff the temperature was in the 60s.

So honestly I don’t know what the hell happened but it literally started to snow.  I guess the temperature dropped suddenly.  Who the hell knows.  What I should also mention is that I was wearing sneakers.  Not hiking sneakers but rather those really thin Saucony running shoes.

Within about 2 minutes it started to get extremely slippery.  Needless to say I was pretty scared.  I knew that it was time to go back up the trail and return to the top where my girlfriend was waiting.

The trip to the top was not without its challenges however.  I must have slipped 10-15 times because there was zero traction on my sneakers and the original dirt path became extremely muddy.  Of those 10-15 times that I slipped around 2 or 3 were the kind where I knew if I had slipped a few feet more I’d have been another casualty of the Grand Canyon.

Luckily I made it back to the top, managed to grab a small rock that I still have to this day, and told my wife of my “excursion.”

The lesson it taught me about business

At the time of the trip I was just beginning my career as an entrepreneur and little did I know how much that experience would be a metaphor of the years ahead.  If there’s one concrete lesson I could say I learned from that experience it’s this:  Expect the unexpected and adjust.

The fact that mother nature could turn on a time like that and practically kill me made me realize just how small I was in comparison to the rest of the world.  That comparison is very similar in business. There are countless experiences we’ve all gone through and will continue to go through in our business endeavors that come out of nowhere.  When these things happen we’ve got to adjust, and adjust quickly.

I’m not saying that we can always be ready for these things to happen, but I am saying that we should literally expect them to happen and not be as surprised when they do.  Ultimate we have no control over much of our lives.  All we can do is control what we can to the best of our ability.  As for the rest, we need to deal with it.

When it started to snow on that mountain, I had a choice: I could have kept slipping to the point where eventually a giant slip would have taken me right down the canyon, or I could quickly adjust to the terrain, see what I could hold onto, find new angles to walk around so I wouldn’t slip as badly, and do whatever it is I had to do to get back up to the top of the canyon.

Thankfully I chose the latter.