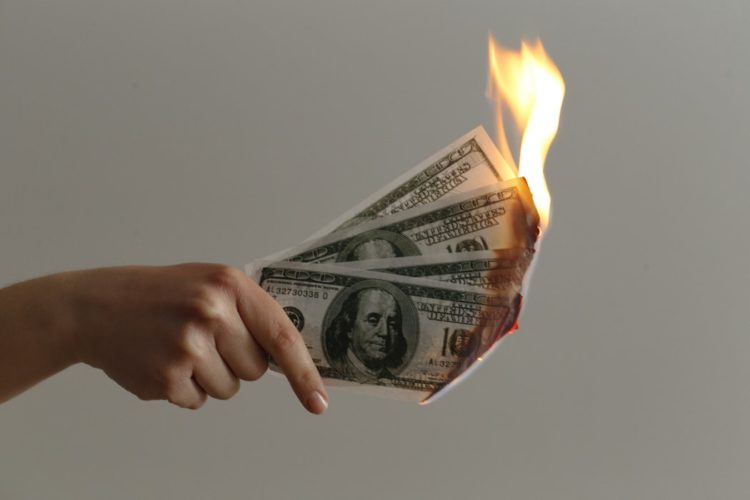 Recently I’ve been reflecting on the many instances in my life where I’ve been completely burned financially.  I’m not sure why but I can tell you one thing: I’m definitely not angry about it.  Sure at the time I was pissed as all hell, but looking back I realize that each one of those instances was a great learning experience.   There are a few that I’d like to highlight so you can get a better understanding of the lessons that were learned.

I went into this one in great detail in a separate article.  But here’s the gist of it.  Years ago I put a nice little bet on a stock that a buddy of mine (who at the time worked for Jim Cramer) said was a virtual lock.  Was it a lock?  Of course not.  I got smoked on this stock within a matter of weeks and finally hit “sell” taking a loss of over 20 grand.  It was definitely a gut bunch at the time because back then I didn’t really have a ton of money to my name.  After the dust settled however, I got up and said to myself, “I’m never going to take any stock advice ever again.”  And since that time I’ve made all my own investment decisions and done all of my own research, for better or for worse.  I can tell you that it’s been mostly for the better.

Back in my earlier days of running my own business, I had a partner.  The two of us had decided that we were going to hire someone to do some business development for us.  We were pitched pretty hard by someone we already knew who was already successful.  But you know something?  Neither of us really liked this guy.  We never fully trusted him and in retrospect the two of us just saw green.  We were blinded by the possibility of making a ton of money and didn’t really pay attention to the fact that this guy was going to do absolutely nothing for us.  Turns out we were unfortunately right.  In total I think this guy made us back maybe $2,000.  So yeah, we lost $58,000 over the course of about a year and got virtually none of it back.  The lesson?  This one was just a harsh lesson period, but I think this one came down to trusting our instincts.  We knew this guy was rotten and yet we hired him anyway.  Not to mention “if you can do something yourself, do it yourself.”  That’s not always the case but in this instance it was.

This one sill burns me to this day.  I’ve never fully recovered but I find solace in this because I’m still completely woke by this experience.  This happened around 7-8 years ago now, but my partner and I decided to work with a company with a history of payment issues.  However, the prospects of earning a considerable amount of money were just too great to pass up.  And frankly we were right. In retrospect the second this company tried to pay us months and months late over and over should have been a red flag.  And it was a red flag but the money was just too great.   However, before we even blinked our eyes we had racked up literally a quarter million dollars in receivables that was never paid.  Long story short we somehow settled for $55,000 and easily had $250,000  of money still owed to us.  P.S. that company is no longer in business.  But for this one?  I take full responsibility as does my partner.  We should have known at the first sign of payment trouble that we should have paused the relationship right then and there.  Lesson learned.  A brutal lesson, but a lesson nonetheless.

I’ve lost a ton of money

And this leads me right back to the title of this article.  Do I have a lot of money?  By national standards and in comparison to the average American the answer is yes.  But I’ve also lost a ton of money.  I’ve probably lost more money than some people make in a span of decades.  I bring this up because I’ve never, not once in my entire life, met a person who has a considerable amount of money that hasn’t lost a ton of money as well.

It’s because of these losses that I’ve learned to avoid certain kinds of mistakes and navigate my way around money so that it now works for me instead of against me.  Am I saying to go out there and make stupid decisions?  Of course not.  Am I saying you should go out there and lose a ton of money just for the sake of it?  No.  But I am saying that each and every time you lose money, whether it’s a large amount or small amount should be a learning experience for the next time a similar instance comes up.

If you’re not learning from these mistakes then you’re doing it wrong.