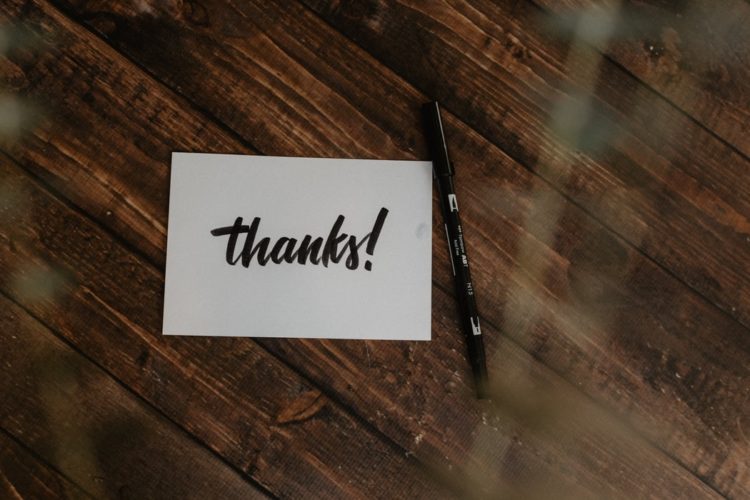 Let’s not even begin with people who don’t even bother to say “thank you.”  To all of you out there, you know who you are and frankly I don’t think you’ll ever differentiate yourselves from anyone else for the rest of your lives if you don’t even have the courtesy to say “thank you.”   So let’s just assume I’m addressing this to everyone out there who does take the time to reply to emails, texts, and phone calls.

But let’s also assume that many of you out there are the types of people that respond in the lightest, easiest, and most automatic ways possible.  Most of us might say things like “thank you,” or “nice job” or “thanks for sharing” when it comes to a reply.  Be it an email reply, a voicemail reply, or even a comment on someone’s social media post,  while two word phrases are acknowledgment, they’re too common and you’ll never stand out if you keep doing it.  So don’t.

The age we’re in

I almost don’t blame people out there for simple replies.  Our inboxes and social media feeds are filled with so much junk that we don’t know what to respond to.  It can feel overwhelming to have the burden of knowing you need to respond to a zillion messages or comment on thousands of posts.  Well, actually, you don’t but that’s another article altogether.

The fact is that the media even encourages us to do this.  Even on Linkedin, a huge networking site that prides itself on interaction between potential colleagues in a meaningful way has recently added “phrase replies” to their toolbox.  So now if you see someone’s content you can literally hit a button and you’ll have the option to have a comment say “Well said, thanks for posting, or this is great.” See below:

We’ve literally gotten to the point where we’re allowed to be lazy enough to not even type “thank you” which takes literally all of 1-2 seconds.

I find it amusing that in an era where information consumption is so high and attention spans so low, that people actually think that a cookie cutter email or phrase is going to get them anywhere anymore. But here’s the thing.  You don’t even have to put in that much effort anymore to stand out from the pack.  Seriously, you don’t.  We’re talking a few extra words.

Add an extra thought and maybe even a why

Are we talking 10 minutes here?  No.  We’re not talking writing a screenplay or a novel in an email response.  We’re talking showing the person reading the email that you are paying attention to them.  That you took the extra 5 seconds to give them an extra thought. You might not realize it but that extra thought will go miles and miles.

I find it funny how the world is coming full circle in regards to sales tactics and marketing.  Back in the day cold calling was the single best way to prospect clients.  Then cold-calling became almost taboo.  Why cold-call when you have the internet?  Why cold-call when you can email?  Why cold call when there’s social media?  Here’s how I look at it.   Why NOT cold call.  In today’s day and age people are blown away when someone actually picks up the phone to call them.  Why not give it a shot?

Remember door to door?  Can you even imagine the surprise on someone’s face if you simply showed up to their office to pitch them an idea?  No calls. No emails.  You just showed up.  Personally I think it would be pretty cool to see that kind of initiative. But maybe that’s just me.  Who knows?

It could be the difference maker

If someone told you that writing three extra words would net you $10,000 you’d do it right?  Of course you would.  Case closed.  Doing something as little as this can literally net you more money.  If the choice a potential client is going to make comes down to you and one other guy and the potential client remembers your email over theirs, that could be the difference maker.  Remember that the next time you just write “thank you.”